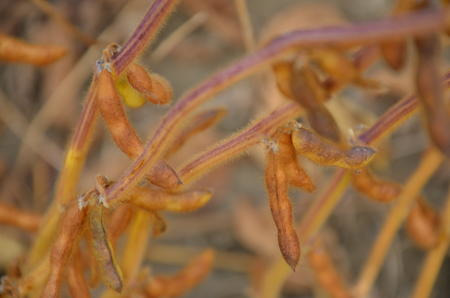 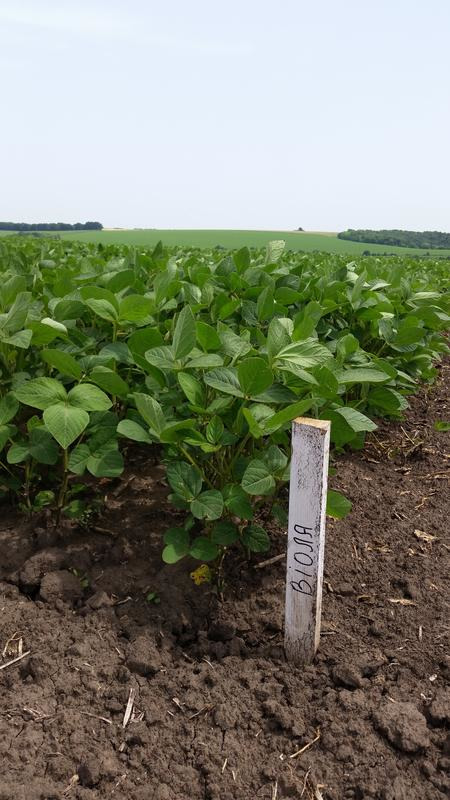 Ideal are lighter soils with faster warming in spring and with sufficient water supply.
Soils with a lot of stones are not suitable, as the harvester/combine hast o cut as low as possible.
Locations with a high weed pressure should be avoided.
Soybean is very attractive to doves, crows, rabbits and deer.

The pre-crop should suppress thermopphilous late germinating weeds, winter cereals are preferable to spring weeds.
Soybean is in general affected by Sclerotinia, therefore a 4 year separation to sunflower, oilseed rape and tobacco is mandatory.
Soybean is partly self- compatible. As long as there are no crop rotation based disease it can be grown after soybean to make use of the Rhizobium bactera in the soil.

Mid to end of April, latest beginning of May. Soil tempterature must be above 10°C. Late sowing can lead to a harvest in late October.
Too early sowing followed by cold and moist conditions will lead to a significant decrease of emergent plants.

Basic fertilizer application of Phosphor, Potassium and Magnesium according to nutrient removal by the pre-crop (with 30 dt/ha yield: 48 kg/ha P205, 51 kg K20, 15 kg MgO). Reduced or additinal amounts should be handled with regard to different soil types No nitrogen fertilizer in the beginnig to increase the number of Rhizobium nodules

Nodule forming bacteria (Bradyrhizobium japonicum) supply the plants with nitrogen fixated from the air. If soybean has never been brown on the respective feild they are not present and have to be applied to the seed.
This inoculation should take place right before sowing, because the bacteria are very sensible to heat and sunlight. The instructions given by the supplier oft he Inoculant shold be followed. Please make sure to not damage the seed in the inoculation process (e.g. mechanical damage).
If soybean has been grown for several years in the respective field, pre-inoculated seed can be sufficient to form enough nodules for nitrogen fixation.
Recommended Inoculants are: based on turf with additional adhesive
"NPPL Force 48“ (BASF) and as a powder (without additional adhesive) “HISTICK Soy“ (BASF) and "Biodoz Soja“(De Sangosse). There is a new liquid Inoculant with adhesive: „Rizoliq TOP S“ (De Sangosse).
N-Fertilizer is counter-productive as it reduces the amount of nodules. It cannot replace succesfull nodule formation and only makes sense if there ano nodules visible until flowering.

Important for seed inculation:
Keep inoculant away from light, store it dry and not above 25°C.
Do not use chlorinated water.
Prepare the seed inoculation in the shadow, the start sowing directly afterwards.
Do not let the sowing machine stand in the sun and get to warm.
Clean the sowing machine before to remoce all rest of seed treatment from previous sowings. They could harm the bacteria.

Recommendation: grow soybean in mixtures for greening to start the soil inoculation.

CONTROL of nodule formation in mid-June: if no or too few nodules can be found and if the plants look yellow, the nitrogen can be apllied in 1or 2 doses (60 - 100 kg N/ha).

Ideal is a pneumatic single seed sowing machine (saves seed costs and does not damage the kernels). Normal drill technolopgy is also approved

Succesfull weed CONTROL is the key for good soybean production. Due to relativ slow juvenile deleopment as compared to other crops. Soybean tends to heavy weed problems espcially under colder conditions.

Convulvulus and Cirsium cannotbe controlled chemically in Soybean (at least with herbicides allowed in soybean in Germany).

Growing catch and COVER crops as well as soil prepartion can reduce the weed pressure considerably. Avoid too early planting!

From September until October, leaves have turned yellow and dropped tot he ground.Kernels are loose in the pods and make KLAPPERSOUND when you shake the plants. Targetd seed moisture 14 - 20 %. Order combine before it is prepared for grain maize harvest!

Keep rotation of thresher low (400 - 600 U/min) to reduce damage tot he kernels and to have a clean harvest without pod debris. Maize and pea are hard to separate from soybean and reduce the market value. Combine, transport vehicles and storage should be clean!

Storage with grain moisture below 13% possible. For longer storage moisture should be below 12% and for very long storage below 9%.