In comparison with cereals, maize as a C4-plant needs relatively less water per kilogramme dry matter. As the main growth however takes place in summer, maize reacts very quickly to a lack of precipitation. This means that one has to pull out all the stops to successfully grow maize on the sandy soils of southern Brandenburg with their low levels of precipitation. 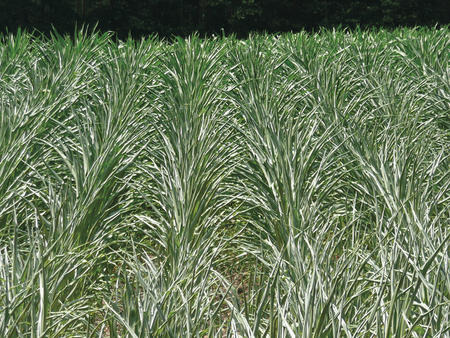 The lighter the site, the more often the maize … 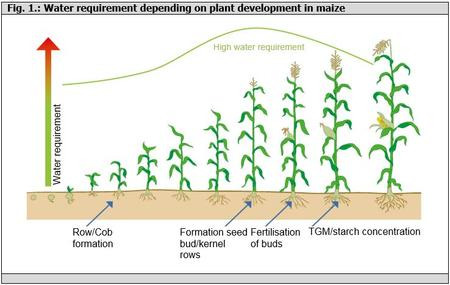 Cob formation and the number of kernel rows per cob are already formed in the 4-5 leaf stage (Fig. 1). The number of kernels per kernel row is fixed approx. one to two weeks before flowering during extension of the maize plant and from then on, the environmental influence increases considerably. Under severe drought stress before flowering, the female flowers are delayed and the time from end of tasseling to the appearance of the silks increases. In extreme cases, this can diverge so far that all the pollen of the tassels is already shaken out, before the silks appear. The result is maize with cob formation but without kernel formation.

The plant reacts particularly sensitively to environmental influences in terms of yield and quality during the development phase between flower and green ripeness; after green ripeness, the extent of the environmental influence recedes again. The most critical point with most influence on maize yield and quality is the time from tasseling to visible kernel formation (BBCH 55–71). During normal seeding dates of early to mid-late varieties between 15 and 30 April the critical point in Brandenburg conditions would be in the middle of July (±10 d). Should there be no precipitation from mid/end June, there is a high risk that the maize forms short, not fully-filled cobs. This has consequences for mass formation as well as for quality. Late drought from mid-July has a larger influence on the cob quality, e.g. starch concentration.

Heat can also be problematic

Even with sufficient precipitation, the fertility of pollen can be massively reduced at temperatures above 30 °C combined with low relative humidity. High night temperatures result in respiration losses, which lead to lack of assimilates in the freshly fertilised kernels. This can then, in the worst case, be reduced again.

Models can be used to determine the stress risk

Besides the absolute amount of precipitation and its distribution, the soil buffer and the usable field capacity (nFK) of the site also play an important role. The nFK is influenced by soil type and effective root space. On bad Brandenburg soils categorised as medium sandy to heavily loamy and with effective root spaces of 30 to 60 cm, there is only an nFK of 25 to 60 mm to be used as a base. In principle: The larger the nFK, the lower the risk of drought stress. When there is actual drought stress for the crop is also dependant on the evaporation rate. The evaporation from the crop is dependant on the soil water content, the crop development stage, air temperature and humidity, wind, etc. The number of actual stress days can be calculated from these parameters using mathematical models. The daily values of the years 2003–2013 (10 years) of the sites Angermünde, Potsdam, Lindenberg and Cottbus were used for the calculation of East Brandenburg (Table 1).

Table 1 also shows that the soil quality more than the weather or the location of the site influences the stress situation of the maize crop: The poorer the soil, the more often drought stress results and therefore a reduction in yield. On poor Brandenburg soils (e.g. 25 mm usable field capacity), statistically seen, e.g. purely theoretically, in 5 to 6 years out of 10 one must expect lower yields due to drought stress.

The poorer the soil, the greater are the demands placed on the maize varieties. The drought stress behaviour, however, is not a test criterion in official variety tests. The tested criterion corn smut is one – though weak – indicator for stress resistance of the variety. The fungus affects preferentially the not fully pollinated cobs, which appear more often as a reaction to drought stress. Furthermore, however, it infects the maize through injury to the stalk, which is not connected to drought stress. In the tests, the varieties often are only one grade apart, however, whether corn smut is present or not is quite decisive for the feed uptake.

The same is the case for dry leaves: The ripening behaviour of the leaves in tests showed only little influence on the dry matter yield, however, a high content of dry material in maize silage can have a negative effect on the feeding behaviour of the animals. Reliable pollination of the cobs is one of the most important criteria for yield and quality. As the first drought stress often comes early, fast juvenile development is also an advantage in cold conditions (e.g. Sunshinos).

The criteria juvenile development and kernel development of the cobs can be checked with relatively little effort though own variety demonstrations. It is important not to be blinded by visual characteristics such as growth height or leaf position at silage ripeness, as these parameters give no indication whatsoever regarding the possible yield or quality.

Even from official testing, it cannot be determined, which ripeness class is first choice for dry sites. For this, the differences in precipitation distribution in the course of the years are too large; sometimes the late varieties are hit particularly hard, sometimes the early varieties.

However, it makes sense to stagger the flowering times over a longer time period, as this way you escape the risk of having the entire crop in a damaging dry phase. Mid-late varieties have a higher temperature demand than earlier varieties; for flowering as well as for ripeness. Therefore, one should really sow early varieties in time and use the later sowing dates for mid-late varieties as you can then rectify flowering and the possible harvest date. This is particularly important during fast ripening of the various varieties caused by dryness and heat.