The reformation of the fertilisation ordinance gives farmers the incentive to tackle soil fertility with greater intensity. Because only a healthy, well-structured soil can store nutrients optimally and make them available to the plants.

This complex system can be influenced positively using catch crops. The most obvious measure for securing the nutrient supply is to provide the plants with regular and requirement-oriented organic and mineral fertilisation. As this possibility will be restricted in the future through the reformation of the fertilisation ordinance, additional arable measures will need to be incorporated. 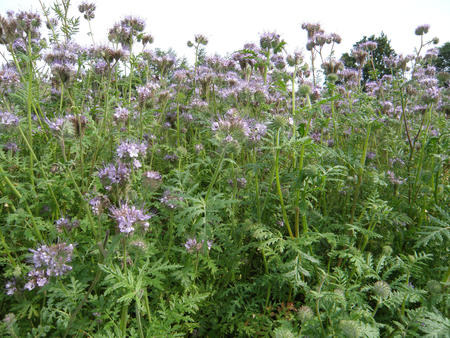 All the soil characteristics must be optimised in such a way that the plants can develop well and they can take up nutrients with as little loss as possible. Nutrient preservation is also part of loss-free nutrient uptake during the phase when there is no main culture in the field. After harvesting the main crop in summer or autumn, a large amount of organic material remains in the soil in the form of roots, stubble, husks and other harvest debris. Soil micro-organisms decompose these plant remains and release the nutrients bound in the plant material. Soil moisture and soil temperature have a huge influence on the bioconversion speed and extent in autumn. Favourable mineralisation conditions in summer/autumn 2015 often resulted in Nmin values (at 0 to 90 cm, measured in Schleswig-Holstein and Baden-Württemberg) of 60–80 kg N/ha after maize and of 30–50 kg N/ha after winter cereals.

If the area is not reseeded, there is a high risk that this nutrient amount will leach out during the winter months. Greening over winter ensures low seepage water rates and low nitrate loads in the ground water. The particularly positive effect of catch crop cultivation on groundwater protection cannot be ignored. While in general there is sufficient time after winter cereals to establish a catch crop successfully, this is often only possible after maize in early harvest regions with particularly good growing and late-sowing catch crops (e.g. winter rye, white mustard or mixed as viterra® SCHNELLGRÜN). Often only the use of an undersow crop already sown during the vegetation stage is suitable with normal maize harvest times.

Catch crops can bind 70 % of the nitrogen

The amount of the nutrient stored in the catch crop to be taken into consideration is dependent on both the type and success of the catch crop. Particularly well-developed crops of catch crops can take up 150  kg N/ha and more after earlier and careful sowing. An initial fertilisation of the catch crop with around 30 to 60 kg N/ha helps early development. However, fertilisation only makes sense when the crop is sown at the correct time. The added nitrogen can only be taken up and assimilated if there is enough time for biomass formation. Crucifers such as oil radish, white mustard and winter turnip rape generally have a high nitrogen demand and a high enrichment capacity. Depending on the site and nutrient availability, they bind 60 to over 100 kg N/ha purely in the aerial parts. Crucifers can save huge amounts of nutrients from being moved into the deeper soil layers through their intensive rooting systems and deep root penetration. Legumes as catch crops often demonstrate even higher N-contents, but the incorporated nitrogen is not entirely removed from the soil, instead it is bound out of the air with the aid of rhizobia. Winter-hardy catch crops such as grasses and green fodder rye or crucifers are often grown to meet the targets set by the Water Framework Directive, and can reduce the nitrate content of the soil by up to 75 %.

How much nitrogen can be allowed for?

Even if the calculation of the allowable nitrogen amount requires a certain degree intuition, as a rule of thumb a preceding crop value of at least 10–20 kg N/ha can be calculated in poor to normally developed crops and up to 40 kg N/ha in well-developed crops.

These nutrient amounts are, however, not fully available at the start of the vegetation phase of the follow-on crop, but instead are released during growing. The bioconversion speed is influenced by the degree of woodiness and decomposition, the C/N ratio and the intensity of soil working, and with it the associated soil temperature in spring. The speed of mineralisation increases with decreasing lignin content, reduction in the C/N ratio, increasing decomposition and soil temperature. Investigations into the Nmin content (0-90 cm and 0-60 cm) in March/April in various regions and on a variety of soils in Lower Saxony demonstrated a tendency towards higher Nmin contents after catch crops. Differences of 3 to over 20 kg N/ha probably result from the already mineralised part of the frozen-off catch crop found at any one sampling time point. It can be assumed that in the course of further growth with increasing nutrient requirements of the following crops (maize, potato, sugar beet) additional amounts of nitrogen will be released.

Long-term effects can also be measured

Through the repeated cultivation of catch crops or catch crop mixtures, scarcely available nutrients can be changed to a readily available form by uptake and subsequent mineralisation. This predominantly influences the availability of phosphorus. Not only does the catch crop development benefit from the nutrient retention in the aerial and subterranean growth of the catch crop and the subsequent release. The nutrient loss through removal of soil particles by wind and water erosion is also considerably reduced by catch crops or their mulch layer only.

Earthworms, which are promoted by the additional organic material from catch crops, line their tunnel walls with their castings containing plant-available nutrients. Not only are the nutrient contents of the worm castings considerably higher than in the surrounding earth, but the availability of the nutrients they contain is also higher.