In many aspects rye is the most efficient crop of all cereals: Water, nutrient as well as cost efficiency are just a few examples. Results of a joint venture with the University of Leeds prove that rye is ideally suited to improve fattening efficiency. Fenja Luhmann, SAATEN-UNION, and Dr. Wilke Griep, SALVANA TIERNAHRUNG report about it. 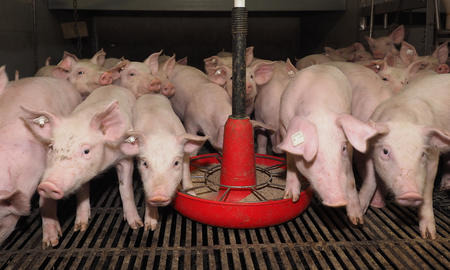 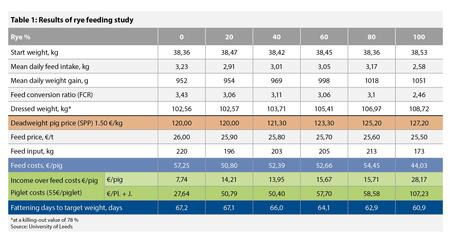 effects of profitability of rye in pig feeding 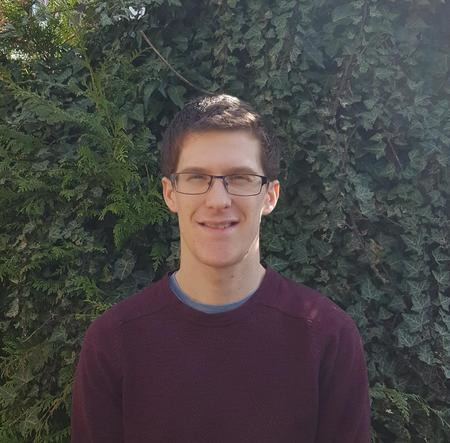 Animal feed costs are the largest cash expense in pig feeding. Therefore, it is all the more important to make good use of all diet components and to reduce losses. Whatever improves feed consumption contributes to reducing feeding costs and saving resources and in doing so improves the sustainability and profitability of pig production. Hereto the University of Leeds has now published first results of a study that had the aim of analysing the effect of an increasing hybrid rye proportion in pig diets. One of the trial objectives was to determine if the rye proportion in a diet has an effect on growth performance, N and P digestibility and intestinal health. Furthermore, the effect of feeding hybrid rye on the N and P content in slurry was analysed. The University of Leeds is an experienced and recognised research institute in the field of animal science. It is considered to be one of the most renowned European research institutes in regard to nutrition, behaviour and pig husbandry. This is the first of three parts which we want to present in praxisnah. Part I refers to the growth performance results.

In the UK pigs are usually fattened from 35 kg to a slaughtering weight of 105 – 110 kg. This differs from the common practice in Germany (28 – 125 kg). Traditionally, pigs are not castrated and therefore slaughtered at a very much younger age and lighter weight before they develop “boar taint”, aggressions or their libido.

In a complete randomised block design six different diets were compared which only differed in regard to their proportion of rye fed as cereal component in the ration (0 %, 20 %, 40 %, 60 %, 80 % 100 % rye). The fattening trial was carried out twice in a finisher building with two units consisting of 12 pens per unit. One pen housed eight to nine animals with equal gender composition. The trial was conducted with eight replicates using a total of 68 pigs per treatment.

The pig breed used is a common cross in the UK (Large White x Landrace x Duroc). As CONTROL a one diet cereal-soybean meal mixture was fed which is very commonly used in the UK. In order to determine a possible dose-response relationship, the diet of the treatment groups differed in their rye proportion of the total cereal in the ration. All diets contained a little over 17 % crude protein which would be an unusually high protein supply in Germany.

The fattening of pigs from 38 to 105 kg live weight show significant differences between the CONTROL diet containing barley and wheat and the treatments containing rye.

On average over the total fattening period pigs which were fed with liquid feed had a daily weight gain of 992 g at an average daily feed intake of 2.96 kg. Also, under the feeding conditions in the UK using rye as a feed component improves feeding efficiency. The treatments with very high levels of rye even show superiority compared to other rye treatment groups. The daily weight gain shows a clear dose-response relationship. The daily weight gain increased with increasing levels of rye in the ration and the feed conversion ratio remained on a steady level.

Concerning the feed conversion ratio, a significant superiority can be determined in the treatment groups with rye compared to the solely wheat-barley ration. In regard to the index “income over feed costs” out of those two effects a total economic benefit can be calculated in the scale of 6 to 8 €/pig. This corresponds to an economic advantage of up to 0.70 €/kg slaughter weight (Table 1).

Especially for fattening grower/finisher pigs higher proportions of rye offer, in a multiphase N reduced feeding system which has become more and more common in Germany, a lot of potential to decrease the protein content and feed costs even further. Rye is not only ahead in arable farming but also as ENERGY and nutrient supplier in feeding.

Comparing the CONTROL to the mean of all treatments with a rye proportion of up to 80 % advantages of up to 7 € per slaughter pig can be determined using the calculated profitability indices of the study and local prices.

According to the results of this trial it is no disadvantage to use rye as sole cereal component. The contrary is the case: The treatment shows exceptionally favourable effects on the daily weight gain as well as on feed efficiency. However, the values of the 100 % treatment differ from the statistically expected values. So far there is no logical explanation for this so that further investigations are necessary.

In contrast to German fattening conditions the values of the feed conversion ratio are about 0.2 to 0.4 more unfavourable. Feeding equipment and diets could be responsible for that as well as the stronger focus on growth in the English terminal crossbreds.

Feed intake is the highest with the wheat-barley ration and the animals which are fed with the treatments containing rye eat significantly less. Nonetheless, at the same time they achieve higher daily weight gains. The feeding strategy which incorporates solely rye as cereal had the lowest feed intake and the highest daily weight gain. Hence, rye as a feed component seems to affect the digestive efficiency and feed conversion ratio in intensive pig production!

The latest study, presented in this article, by the agricultural research department of the University of Leeds (UK) shows that fattening pigs eat less but at the same time have a higher daily weight gain. This means that the feed conversion ratio is better resulting in a higher finisher weight. Conversely that means that either the slaughter weight is achieved in less days or within the same fattening period a higher slaughter weight can be achieved.Those results suggest that rye can not only be used at extremely high rates in pig fattening without causing any negative effects but also clearly improves production efficiency. And: Rye is cheaper to produce than wheat or barley.

Apart from growth performance, animal behaviour, animal health and N and P digestibility of rye were analysed. Those results will be presented in another issue of praxisnah.