Using rye for pig fattening is competitive, supports animal welfare and animal health and contributes to more sustainability! A new research project, which is comprehensively presented in the following, investigates if these positions can be validated and to which economically evaluable extent. 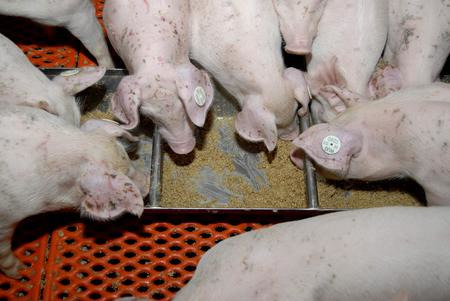 As part of the MyRye project, a new study which is financed by SAATEN-UNION and Elsoms Seeds* investigates the value of hybrid rye in final pig fattening. The 6-month project will be carried out and supervised by Helen Miller, Professor of Animal Biosciences at the University of Leeds. Due to millions of dollars of investment the University of Leeds now has a world-class pig research facility and is one of the best institutes in Europe in regard to research in pig nutrition, behaviour and welfare as well as production systems.

How does rye perform in regard to cost reduction, constituents and animal welfare?

During final fattening, pigs consume the largest amounts of feed. At this stage objectives such as cost-effective and sustainable feed use are particularly important. Health risk and stress minimisation also gain in importance as losses have a greater impact.

The question is: What are the benefits of feeding rye?

1. Purchasing rye will be 2 to 3 Euros cheaper than wheat and 1 to 2 Euros cheaper than barley. In terms of feeding value this price difference is far too big offering a leverage to save considerable cost in pig fattening. Home-grown rye for animal feed saves direct and labour costs (less fertiliser, crop protection, field passes and so on).

2. Rye is an ENERGY-rich grain crop that contains relatively little nitrogen and, with 3.0 %, has the highest lysine content in total protein and highly digestible phosphorus predestining rye for N- and P-reduced final fattening feed mixtures. If pigs take up less crude protein and phosphorus their metabolism and organs are less stressed improving the animal’s health.

At the same time a better feed conversion reduces the amount of produced slurry which also contains less N and P. The latter is especially interesting for farmers with a high stocking rate and little land – less slurry has to be disposed of elsewhere.

3. Fibres are a gut filler and growing substrate for benign microbes in the digestive tract as well as for the development of favourable microbial flora and resilient intestinal health. Rye has more fibres than any other cereal and therefore has a beneficial effect on animal welfare and animal health.

The results of the Leeds University Farms study are expected to be published in May 2020. Praxinah will keep you informed.