When choosing a variety, the classification of rye varieties by the Bundessortenamt (Federal Plant Variety Office) in terms of ergot susceptibility is often an important decision criteria. But how realistic are those classifications? Results from federal state variety trials in Germany and Poland give doubts to product manager Daniel Husmann. 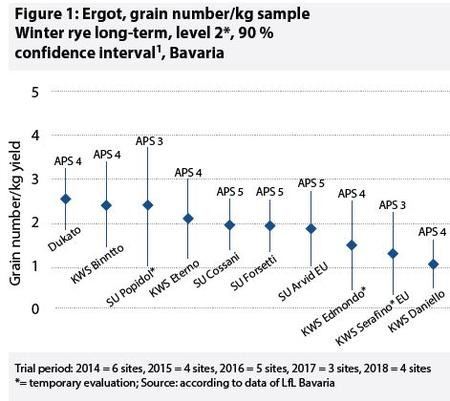 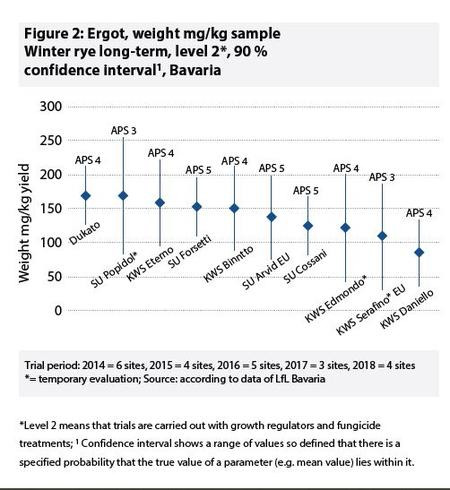 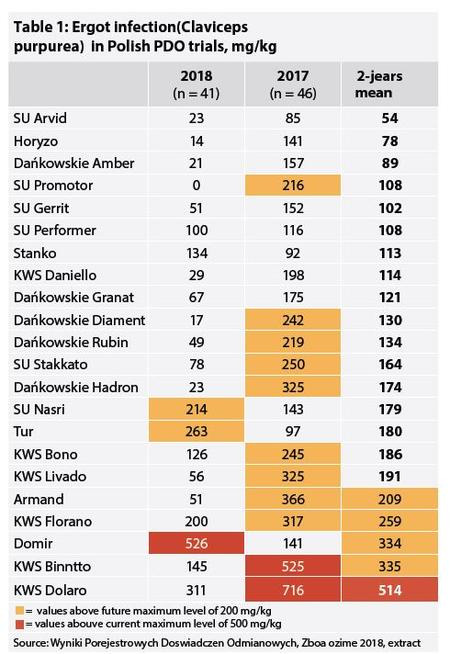 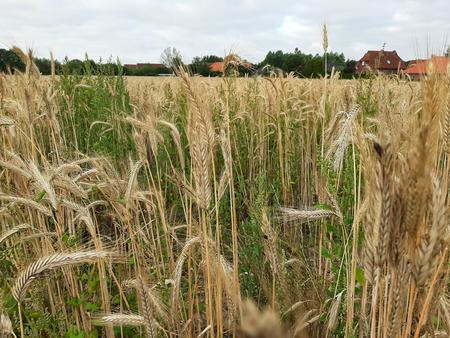 The dormant spores of the fungus Claviceps purpurea are called ergot. If ears got infected during flowering black ergot (sclerotia) develops in place of grain. Out of all cereals rye is most commonly infested by the fungus. In Germany the Bundesssortenamt carries out statutory testings in order to survey susceptibility of rye varieties to ergot. Unlike variety trials carried out by the federal states artificial inoculation is used for statutory testings. The variety’s susceptibility is determined during the 2nd and 3rd year of statutory testing and rated from 1 to 9 (APS) according to their characteristic (1= tolerant, 9= very susceptible). If long-term results of federal state variety trials carried out by the Bavarian State Research Centre for Agriculture (LfL) are compared to the classifications of the Bundessortenamt (Federal Plant Variety Office) it becomes apparent that the results deriving from the federal state office does not comply with the ergot classifications of the Bundessortenamt (Figure 1 and 2).

Any variety can be affected
The five year results with natural inoculation show that in the case of favourable infection conditions ergot is present in all varieties to a greater or lesser extent. According to long-term data varieties like KWS Binntto or KWS Eterno with APS 4 (score 4) are not at all superior to varieties like SU COSSANI or SU ARVID. Those comparatively small variety differences are even lessened by a broad spread. This is due to the year to year varying site and weather conditions.

Results of the Polish PDO trials (Table 1), which are equivalent to the German federal state trials, confirm the results of the LfL. Varieties are tested as pure stands under natural inoculation. This is the same as in the Bavarian State Research Centre for Agriculture (LfL) making a direct comparison possible. It is even likely that the performance without inoculation is even underestimated.

Artificial inoculation delivers different results to natural inoculation.
Varieties, which were rated better after artificial inoculation, showed in parts under real conditions a significant higher susceptibility. A particularly outstanding example is the comparison of the varieties SU PERFORMER (score 6) and KWS Binntto (score 4) (Table 1). After 2 years of testing KWS Binntto showed an average ergot contamination three times higher compared to the variety SU PERFORMER, which is rated with a higher score by the Bundessortenamt. Apart from that the data reveals that all varieties show a year to year fluctuation in ergot severity. According to the regulation (EU) 2015/1940 the maximum ergot sclerotia level in unprocessed cereals, intended for human consumption, is set at 0.5 g/kg (except maize and rice). PDO data shows that this value is exceeded in some years independent of variety and ergot classification. Currently it is discussed to reduce the maximum level to 0.2 g/kg and also to introduce a maximum level for ergot alkaloids. According to current state of knowledge there is no relation between ergot infestation and ergot alkaloids. This means that even loads with a low ergot contamination can possibly have high alkaloid contents.

Weather conditions are the main reason for ergot infection
Rainfall during flowering results in poor pollination favouring the infection by ergot spores. Ergot conidia are mainly spread by splashing water. Apart from that insects also spread conidia. They are attracted by the sweet honeydew which is produced following an infection. The sticky substance, which the insects come in contact with, contains conidia. Like that insects contaminated with conidia initiate infections of healthy flowers.

The above listed measurements are explained in detail in the leaflet “Recommendations for minimising ergot and ergot alkaloids in cereals” (Bundesministerium für Ernährung und Landwirtschaft, 02/2014).


Summary
Under real conditions variety differences in terms of ergot susceptibility do not necessarily comply with the classification of the Bundessortenamt on the basis of artificial inoculation. The question arises if a classification according to artificial inoculation can be representative at all? Fact is that variety choice is only one influencing factor. However, it is not enough by far to CONTROL the ergot problem in severe infection years. Weather conditions during flowering are the main influencing factor. Additionally, production techniques in regard to secondary growth and even flowering have a great influence on the level of ergot infection.

At present breeders undertake great efforts to breed a hybrid rye with high pollen shedding capacity in order to achieve a better plant resistance to ergot. Until then, mixing in conventional rye also offers an effective way of repelling ergot spores. However, if an infection happens affected batches have to be cleaned at the dealer by colour sorting systems.