When and how does tillage make sense?

Catch crop growers with long-term experience know when mechanical tillage of catch crops is required or, if necessary, how can it be avoided. Greening specifications and the newly added catch crop varieties, however, call for us to consider this topic once again. 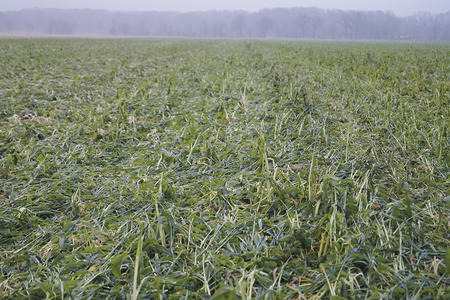 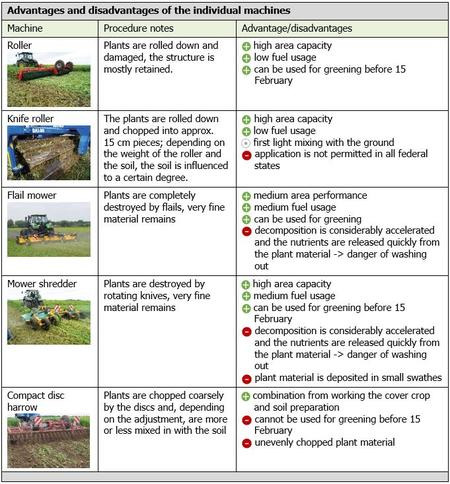 Simplified, there are two main reasons for tillage of catch crops.

The well developed catch crop (see item 1) carries with it the danger of bearing a seed potential, which is undesirable for the following main crops or, in the worst case, can lead to severe problems. Dropped buckwheat that emerges in the following sugar beet cultures is problematic. Buckwheat (Fagopyrum esculenteum) is from the smartweed family and is difficult to CONTROL in sugar beet crops. But also the seed potential of less problematic species should not be increased unnecessarily.

As a first preparatory measure for seeding the follow-on crop (see item 2), the catch crop is tilled to create good seeding conditions for sugar beets, potatoes, maize and other summer crops. This is usually done by mechanically shredding the plant material and by using the rotting process this initiates. This cultivation process does not necessarily need to be done over winter but can also be carried out in spring shortly before seeding. A cultivation procedure such as rolling the catch crop can also increase the susceptibility to frost. This measure then must be carried out before the last frost period.

If possible, no cultivation at all should be performed

In order to most efficiently exploit the full potential of cultivating catch crops, if possible no tillage should be carried out at all or this measure should be performed as late as possible. Also crops that have not be worked recede so far through natural processes of dying-off and weathering that it is often sufficient to work them into the soil with the first measure for seed bed preparation. Particularly the aspect of preserving nutrients would be lost almost entirely, if the catch crop were intensively shredded before winter.

Whether a catch crop forms seeds before winter or not can be influenced by the selection of the type and variety of the catch crop and its appropriately adjusted sowing time. Variety differences mainly exist in white mustard and oil radish. A particularly early oil radish with BSA* -grade 7 in the flowering tendency when seeded at the start of August will start flowering approx. 3 weeks earlier than late varieties such COMPASS or ADAGIO, which are classed as grade 3.

For this reason, particularly late flowering varieties should be used for early seeding dates. For late seeding dates, the flowering tendency is less important, here it is more important to place emphasis on quick initial development. Early flowering varieties also have the advantage of a long vegetative growth phase, during which a lot of plant material is formed - as root material as well as aerial parts. Just as in cereals and other plants, after entering the generative phase, the entire ENERGY is invested in forming seeds and no longer in the formation of root, shoot and leaf matter.

The catch crop types also vary greatly in their susceptibility to frost. However, there are rarely variations within the species. The exception here is the easily frozen-off oil radish COMPASS, which is characterised by its higher frost susceptibility compared with other oil radish varieties. In oil radish particularly, the sowing density also influences its resistance to frosty temperatures. The thicker a radish, the more resistant it is. In dense crops, the individual plants only form thin radishes due to the low available space, and so they are more susceptible to frost.

What must be kept in mind when cultivating?

If, however, the catch crop is to be tilled, the navigability of the soil must be taken into consideration. Lightly frozen soils are ideal, as any track formation and soil compaction can be avoided, and the soil improvement effect of the catch crop is not impaired. In practice, numerous machines including rollers, mulchers and disc harrows are used from a wide range of manufacturers. If the catch crop to be cultivated is approved as an ecological compensation area, only machines that do not engage with the soil can be used. Use of the knife roller is not clearly defined. Whether the knife roller may be used in greening or not is ultimately a matter of interpretation by the states.

The first cultivation date is also variable differently by the states. It is dated in greening as the 15 February, but can be brought forward to 15 January in the framework of exception regulations. The advantages and disadvantages of the individual machines are listed in the adjacent table.