What determines the nitrogen requirement in wheat?

With an increasingly limited N-supply, the grain protein performance becomes an important efficiency parameter. To what extent is the N-processing efficiency for winter wheat determined by the cultivation conditions, the variety and its quality classification? 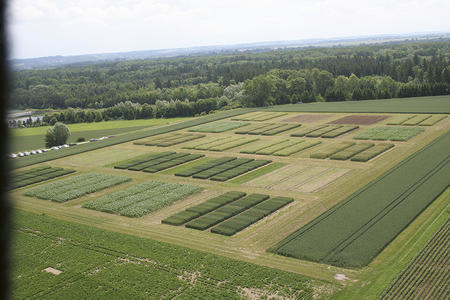 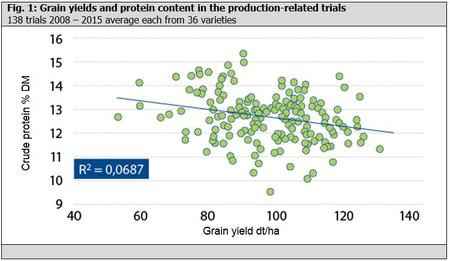 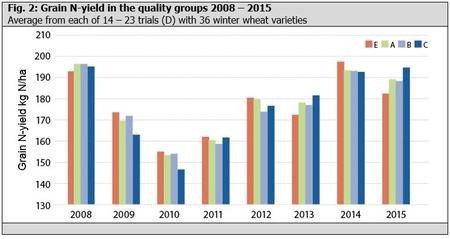 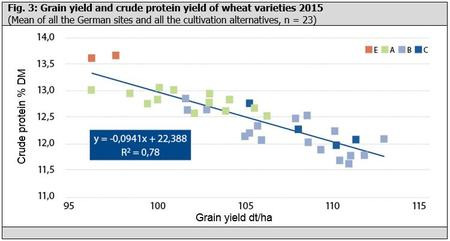 Data based on nine-year trial series

The results of the SAATEN UNION production-related trials are a perfect data basis for investigating the factors influencing the grain-N-yield (see information box). These were performed since 2007 as big plot studies, with always the same test design and distributed throughout the whole of Germany. Young varieties and strains were tested, as were the official reference and market-leading varieties. Therefore this series of trials is especially interesting for evaluation because – unlike “normal” variety trials – it also includes extreme growth conditions as they would occur in practice.

Fig. 1 shows the grain yields and the crude protein content of all the analysable trials of the previous nine years. Every point represents the mean of all the 36 varieties of the relevant trial. The grain yields varied depending on the environment from between 60 and 130 dt/ha in the previous nine years; the crude protein contents were between 9 and 15% DM. Not only year and site effects influence this wide distribution, but also the tested sowing procedures with the commonly used levels of fertilisation and crop protection. The crude protein yield as a product of the two factors lies within a broad range of 6 to 14.5 dt/ha, corresponding to a withdrawal of between 105 and 250 kg N per hectare. The group of points is very loose: across the environments there is no definite relationship between grain yield and protein content. If “everything is right” then 120 dt/ha grain with 14.4 % crude protein are possible, conversely below-average yields do not necessarily lead to high protein contents.

According to the draft of the new fertilisation ordinance, C-wheat varieties, as well as A- and B-wheat varieties, will be allowed a 20-30 kg/ha lower N-requirement than E-varieties. This is because only around half of their higher grain yield is taken into consideration in the loads used for nitrogen measurement – with merely 1 kg N per dt extra yield.

This disadvantage was already addressed in the praxisnah issue 1/2016 and can be confirmed here with data spanning many years (Fig. 2 and Tab. 1). On average no differences concerning the extent and distribution of the N-uptake could be found between the quality groups in the 138 trials over nine years! And this, although the breeding input is larger in the middle quality group and as well more and younger varieties were tested than in the elite wheat varieties, of which there were only 3-4 representatives. Presumably, the amount of photosynthesis-fixed solar ENERGY limits the biosynthesis of the grain contents. Because the formation of amino acids and therefore proteins is ENERGY-intensive and competes with the synthesis of carbohydrates (starches) and hydrocarbons (fats).

The draft of the fertilisation ordinance must therefore be corrected; the quality groups must be treated fairly: for the sake of the practical relevance and with it the acceptance of this ordinance, above all however, when considering the future increase in yield in the most important quality segments of wheat production, A and B. While the farmer is allowed to increase his N-fertilisation by up to 10% of the requirement value due to “exceptional circumstances”, he cannot manipulate it so regularly and furthermore he has to deduct the additional N-fertilisation for the other crops to maintain the overall balance sheet of the plot.

In Fig. 2 the removal by the quality groups is presented according to year. No pattern here is recognisable. In the high yield years sometimes the A- and B-varieties were ahead (2008), while sometimes it was the E-varieties (2014) and sometimes the C-varieties (2015). The same also applies conversely for years with low grain N-yields such as 2010 and 2011.

It is clear that the annual weather conditions have differing effects on the metabolism of the CONTROL groups. In 2015 a very low grain number per ear due to aridity in connection with high levels of sunshine in July enabled very good grain formation with comparatively high protein values even in the lower quality groups. Not so in 2014: due to the very warm spring there was an extremely high grain density and at the same time high crop density and grain formation. The therefore resulting greater assimilate storage (sink) allowed a record harvest in connection with the ideal weather conditions from May, which then led to greater protein dilution, especially in the yield varieties.

Do A- and B-varieties need less nitrogen?

Finally a look at the influence of variety on the grain N-yield. As the range is adjusted every year, multi-year comparisons only are possible for a few varieties. Therefore the range of varieties here is presented as an example of the last test year. The largest variety differences are expected in the B- and A-varieties because, particularly in 2015, these dominated the range in terms of numbers.

The result (Fig. 3): Between the best and worst varieties there are 13 kg for the B-varieties and 14 kg for the A-varieties. In relation to the average removal of around 200 kg N/ha, the relative variety differences were 7 % and therefore lower than the yield differences of around 10 %. This similarity in N-removal can be traced back to the recognised negative relationship between grain yield and crude protein content, which was also confirmed in this trial series with high probability (0.78).