During the last 10-15 years, wheat for early seeding and wheat stubble has become available through breeding. This has created new variety types with a different yield structure and new production requirements: Josef Parzefall, NU Agrar GmbH. 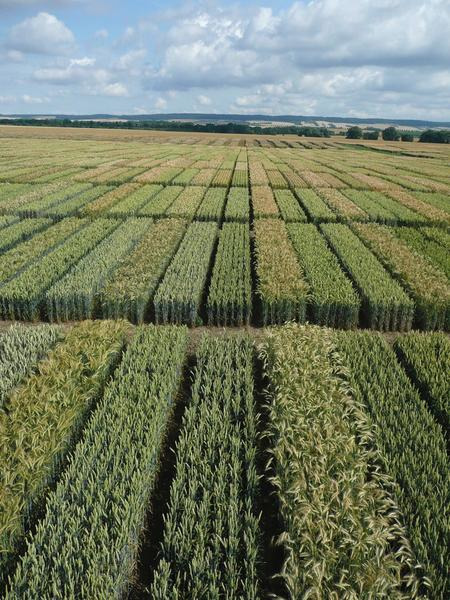 Part I:
What do new varieties have to offer?

Adaptation to prolonged juvenile development
The trigger for this progress in breeding was the demand for early seeding varieties in the mid 1990s. For this, it was necessary to prevent the risk of too early progression into the generative phase and premature bolting. Therefore, with many of the newer varieties the formation of the ears begins later, and the double ridge stage / spicula anlage in EC 25 (BBCH-scale) has been pushed backwards. This was achieved through the increased vernalisation demand of the variety. The extent and strength of vernalisation determines the start of the formation of the ears.

At the same time, the temperature demand of leaf formation was often increased. As ear formation in the main shoot only starts after it has formed at least six of its own leaves, the EC 25 moves backwards when there is an increased mean temperature requirement. In previous years, a wheat variety required 0-70 degree days per formed leaf, today it approximates 90-100 degree days (Kropf, 2015).

If the ear formation in the main shoot is delayed, consequently the side shoots are better much developed at the beginning of the formation of the main shoot ears, particularly after early sowing or a long autumn vegetation. Then, the main shoot, is stuck in “perpetual stage 25” (Schönberger, 2015) so to speak, so that the autumn tillers are formed equally well. Examples of these varieties are TOBAK and Elixier, where the apical dominance of the main shoot is much more weakly developed than in the earlier varieties. The better developed tillers lead to a significant increase in grain density/m², which is highly correlated to the grain yield.

Exemplary for the development of this new variety type – highest grain density through high yielding tillers, no development delay in the generative phase – is the variety row MULAN – RUMOR – FAUSTUS. Let’s hope it continues with PORTHUS. Currently, FAUSTUS is at the upper end of the possible grain density/m² with BSA grade 6 in ear density and 8 in the number of grains per ear (G/E). The grade 8 for FAUSTUS in G/E results from the very well-formed tillers in comparison to the main shoots. Such a yield structure also goes in hand with a very high degree of yield stability, demonstrated by the variety RUMOR, which has been listed as one of the most yield stabile varieties in the LSV for the last three years.

Why do the new varieties have a more stable yield?
This combination of high yield and yield stability was nearly impossible previously. Top yields with high grain densities used to require a very long maturation or grain filling phase. These varieties were late ripening but in general the yield would drop drastically with early onset of heat or draught.

However, the new variety type produces very high grain densities with early or medium ripening time. With it, the yield stability under stress has undoubtedly risen. A quantum leap in breeding!

To explain this: the maximum possible grain density of a wheat crop is practically determined through the flowers established when entering the generative phase (from EC 31). Up this point, a negative influence caused by drought stress is not to be feared. The thousand grain mass (TGM) however is much more endangered by heat, drought, damp and soil compaction. The more the varieties achieve higher grain densities through tiller performance, the greater the importance of the TGM decreases for further gains in yield. A higher TGM potential (from BSA grade 6) only increases the yield, if it goes hand in hand with earlier initiation of grain filling, ideally followed by a long grain filling phase.

Furthermore, the TGM can act as a compensator for low grain densities (e.g. in crops thinned through frost and dampness).

Pinching back correctly is becoming more important!
Until recently, highest yields were mostly connected to a high pinching intensity. But this is history! Even with very high ear density, more and more varieties have high lodging resistance (e.g. FAUSTUS). Nevertheless many new varieties require new thinking processes when using growth regulators in order to avoid negative effects on the yield structure. This is because the growth regulators work most intensively on the younger plant parts, and therefore more on the tillers than on the main shoots. Therefore, the newer varieties must be stabilised without reducing the side shoots too drastically, as those make quite a decisive contribution towards a higher yield potential. Proof of this are the very high relative yields of the newer variety type in stage 1 of the LSV (mostly without growth regulator), which focuses on the ear density, e.g. FAUSTUS in stage 1 of the Bavarian LSV 2015. When not under pressure from yellow rust, RUMOR also performed exceptionally well in the growth regulator-free stage.

Higher dosed and later utilised “hard” growth regulators can quickly lead to a severe reduction of tillers, depending on the weather conditions.

Resistance as last resort?
Until now, the performance of fungicides was demonstrated on disease susceptible varieties, in order to show the highest possible cost effectiveness. According to the latest assessments, the pathogens (e.g. Septoria tritici), however, have stopped “playing”. In years of infestation, the performance reserve of even the strongest azole prothioconazole is practically depleted in terms of curative effects, a “long-term effect” often only lasts a few days. In the case of stronger infestations, experts often advise using high amounts of carboxamides straight away, regardless of the risk of resistance formation.

Why does one persist in parts with susceptible varieties during variety consultation in view of this dangerous development? Resistance supports the preservation of performance of the best fungicides and this might be the deciding factor in the next damp year. The varieties approved in 2014 and 2015 demonstrated in the rating year 2013 considerable yield gains despite very high pressure from Septoria due to their resistance in stage 1 and in stage 2 with fungicide use. Thus, the new wheat genetics are not only more stable in dry years due to their higher grain density, but also in damp-wet years due to strong resistances and better lodging resistance.

Until now, the tendency was, to use cheaper fungicides of the azole class or highly reduced carboxamide agents relatively late with varieties with good resistances. However, in healthy varieties, use of reduced amounts of carboxamides in the first half of the incubation period – that means in symptom-free or infestation-free crops – can lead to complete inactivation and possibly even fighting back of Septorica tritici.