90 % hybrid wheat on arid sites: “I need this reliable yield”

Anyone wanting to earn money with wheat on an arid site with a soil rating of 30-40 must really do their maths. This makes the strategy of FELIX Hanssen from Wischer bei Stendal even more fascinating: For 10 years he has relied on hybrid wheat, which in the meantime is grown on almost 90 % of his winter wheat fields! 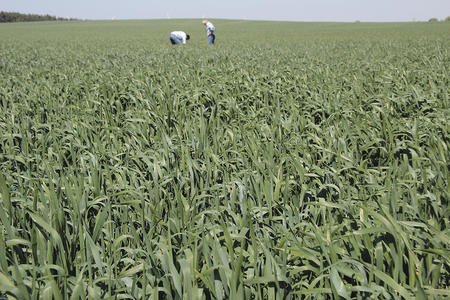 HYSTAR 85 grains/m²: If the nitrogen enters the … 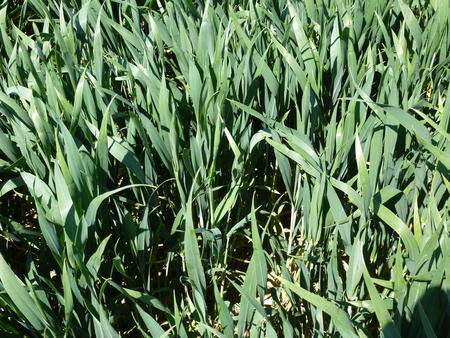 The diluvial sites of the ploughless cash crop farm are characterised by drought and heat stress: The low annual precipitation of 550 mm leads to extended dry periods in early summer, often accompanied by temperatures of over 30 °C. The majority of the fields with soil ratings of 18 up to a maximum of 40 would not be used for wheat growing at all in Germany, even in the climatically favourable regions. But on this farm, winter wheat is the primary crop and realises on average 82 dt/ha per year.

“Many of my sites are not wheat sites in the classical sense – too light or much too dry in the majority of years with distinct early summer aridity. Additionally, there is a high production risk caused by often multiple days of high temperatures over 30 °C. If one wants to economically produce wheat here, one must deal very well with these conditions and develop counter strategies”, Hanssen explains his situation.

As the first hybrid wheat varieties found their way into practical use after the turn of the century, it was his advisor FRANZ Hollmann from Großbetriebsberatung GBB, who brought these alternatives to Hanssen’s attention. Already at that time, the central selling argument of the hybrid wheat provider SAATEN-UNION was the good drought resistance of these varieties. In 2005, FELIX Hanssen gained his first experience with the variety HYBNOS 1, initially on a few hectares, and based on his good experiences he has continued to gradually expand his cultivation of hybrid wheat. Today non-hybrid varieties are only found on the best sites because “on the border-line sites – in other words those with stress and particularly drought – the hybrids are simply more vigorous. They have the better root-system and simply persevere better.“

At this site in the Altmark region there is extreme economic pressure – especially considering the current price situation. How has FELIX Hanssen adjusted his wheat production?

In northern and eastern Germany it is not uncommon for very early sowing times to be chosen in order to generate more yield over the longer vegetation period. With the lack of insecticidal seed dressing, early sowing (5-10 Sept) represents a considerable risk due to virus transmission by aphids and cicadas. Also infestation with fungal pathogens has a tendency to increase, and furthermore the overwintering can be hindered (Typhula). FELIX Hanssen therefore begins sowing wheat around the 15 September. “When insecticide seed dressing was still approved I was able to drill already on 5th September with a justifiable risk”, he explains with regret. When sowing on the 15th September, the seed density is extremely low at approx. 80-85 grains/m2. “If then perhaps 75 grains/m2 emerge, at first it looks very patchy – and one must not become nervous. But the strategy is to give the individual plants plenty of space so that there is sufficient soil space available to provide water and nutrients for strong side shoots and intensive root development. The plants tiller very well and one must also encourage the side shoots to develop because the aim is to achieve 400 to a maximum of 500 spike bearing stalks/m2, depending on the yield expectation. More make no sense due to the water shortage which occurs in normal years”, he explains of his cultivation strategy.

Nitrogen must be in the plants early!

Therefore an early and at the same time sufficient N-fertilisation is very important: “The nitrogen must be in the plants before the early summer drought so that the spike system does not suffer.” Including the shoot application and excluding Nmin, this is 100-120 kg N/ha in spring. For an expected yield of 80 dt/ha, the entire fertilisation of 180 kg N/ha is performed in three to four applications. At the same time, the fertilisation management is not rigid, because Hanssen places emphasis on a crop management adjusted to the weather and the variety.

Naturally, this applies to a great extent to the use of insecticides in autumn against the viruses carried by aphids and cicadas, to the use of growth regulators, and also the use of fungicides. “Growth regulators cost water so too much can really hurt”, is his experience. “I do not think anything of fixed, stage-related fungicide applications and prefer to go by the infection events. Then I am happy to drive out at night, to use the higher air humidity. Combined with modern nozzle technology, the application rates can be reduced and adjusted to the site, allowing considerable cost savings. Only azoles are used prophylactically after spike emergence against brown rust which, for climatic reasons, represents a high risk during the grain filling phase.

And that is how it all pays off

“I drill considerably more thinly due to the high cost of the hybrid wheat seed, and adjust the nitrogen distribution to the crop development. Apart from this, I do not use more or fewer resources and manage the non-hybrid varieties in an identical manner. Despite the low sowing density, the seed costs for hybrid wheat are higher than those for non-hybrid varieties. But that pays off here, as I achieve yields that are 10-11 % higher.”

Where does hybrid wheat work – and where not?

Hybrid wheat is a yield guarantee for FELIX Hanssen. In his experience, in years with sufficient and well distributed precipitation, the differences between hybrid and non-hybrid species largely even out. However, such years are not the rule. “I plant hybrid wheat because the yields are more stable and I need this yield guarantee in this low precipitation region. But of course, hybrid wheat also reaches a limit at some point.” Here Hanssen is speaking from experience, because he consciously pushed the limits and placed hybrid wheat on a sandy soil with a rating of 18 (!) – next to hybrid rye. But: Even hybrid wheat calls it a day on 18-rated sandy soils, where not a single drop of rain has fallen for weeks. The same is true for hybrid rye, however, and the drought-stress symptoms are just as pronounced as those in the wheat.
“At present no arable farming is worthwhile here at these prices – not even with population rye. It is makes more economic sense to take this field out of production”, says Hanssen with regret.

At Hanssen GbR hybrid wheat has predominantly taken the place of rye, and for the meantime it will remain that way. One can learn quite a lot about hybrid wheat from this unusual example.

The discussion was conducted by Sven Böse and Dr. Anke Boenisch